'Think 5k is easy? Try running it with your arse cheeks' 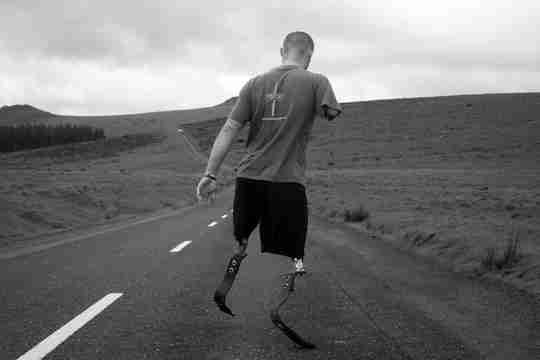 Shaving off my hair and beard was phase one of my REORG fundraising drive, and I am very grateful to everyone that contributed. Phase two is not going to be quite so easy – I am going to do a 5K run.

If you think 5,000 metres sounds easy, I will briefly explain what it is like when you are a triple amputee.

When an able-bodied person walks, your toes, ankles, calf muscles, quads and glutes, all work in harmony to propel you down the street. Then if you start running, your whole upper body is engaged as your arms pump to push you faster.

I am missing both legs above the knee and my right arm above the elbow, so quite a lot of that propulsion just isn’t there for me. I don’t have any feet, or ankles or knees. I have hamstrings and quads, but they’re not connected so don’t work like they should. When I’ve got prosthetics on, pretty much all of the power is coming from my glutes – I get a bit of help from my hips and lower back, but mostly it is the glutes. You try running with nothing but your arse cheeks, it’s exhausting!

For a bilateral, above-the-knee amputee, just walking takes anywhere between 300 and 500 per cent more energy than it does for an able-bodied person. For running that increases to 600 or 700 percent. Add in the fact that I’m missing my right arm, and I’m not sure about the percentage, but you’ll have to take my word for it, it is knackering.

And it’s not just the physical effort. You have to be really careful with the road surfaces, always keeping an eye out for changes in camber and potholes – not just big ones, either, anything can be a hazard. To give you an idea, once I tripped over a crisp packet and nearly knocked my teeth out.

I am about to start training. I don’t like running, but that is precisely why I chose this challenge, because it’s hard. That’s what REORG is all about, doing things that are tough and hopefully getting the rewards for it.I will be training with my mate Ben Wadham, another former Royal Marine Commando.

Ben is able bodied so he will be running backwards with a weighted vest on, trying to match my energy expenditure. And we want to get other people involved, do something tough, something that challenges you. As soon as we’ve set a date and time we will let you know, so everyone can join in. Right, the hard work starts now…