The evolution of Brazilian jiu-jitsu 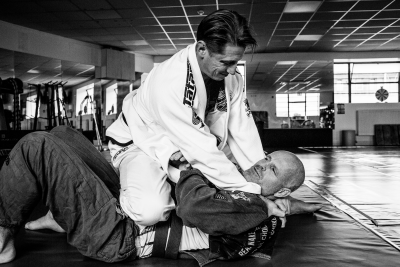 The speed that Brazilian jiu-jitsu clubs have sprung up around the world over the last quarter of a century has been phenomenal. Originally a Japanese grappling art related to judo, old-school jiu-jitsu was adapted by some very tough Brazilians to become the devastating martial art it is today.

Meaning “gentle art” in Japanese, jiu-jitsu dates back well over a thousand years and has its origins in the unarmed combat that Samurai warriors practised in case they should ever find themselves on the battlefield without a sword. In the early 20th century a Japanese jiu-jitsu practitioner called Mitsuyo Maeda – the son of a sumo wrestler – travelled the world challenging people to take on his grappling skills, which he used to overpower countless larger opponents.

When the small but skilful Maeda landed in Brazil he caught the eye of a teenager by the name of Carlos Gracie, who was immediately hooked. Carlos began training every hour he could, and soon got the rest of his large family involved. In 1925 Carlos opened the first Gracie Jiu-Jitsu school by taking out an advertisement in the local newspaper saying: “If you want your arm broken, look for the Gracie Academy.”

This piece of combative marketing genius was how the Gracies became known. The so-called “Gracie Challenge” was an open invitation for anyone, no matter what their size or fighting style, to come and take them on. The Gracies adapted what they learnt from Maeda and they were able to subdue boxers and karate fighters using takedowns and chokeholds that would see the strikers pinned helplessly on the ground.

When Carlos Gracie died at the age of 92 he left behind 21 children and dozens of grandchildren and great-grandchildren. Notable descendants including – but no means limited to – Carlson, Rickson and Roger Gracie have been responsible for carrying on the family name and the fighting art.

But during Carlos’s lifetime, the art was mostly unknown outside of Brazil. The biggest worldwide boost came in the 1990s when people started getting hold of VHS videotapes of the very first UFCs. The skinny and unassuming Royce Gracie – Carlos’s nephew –stunned martial arts fans around the world when he used techniques they had never seen before to bring down and choke huge opponents who looked to anyone with sane eyes that they should have destroyed him with ease.

Those early UFCs look amateurish now, and the sport of mixed martial arts has evolved to the point of being unrecognisable. But every fighter still needs a jiu-jitsu coach, it is a key part of the arsenal. But whether you are a future UFC champion, or someone who is of an age or injury level when you think it is all over for you, it doesn’t matter. Anyone can train in, BJJ. You just do it at a pace and intensity that suits you.

Hélio Gracie was one of Carlos’s brothers and the two are together considered the founding fathers of Brazilian jiu-jitsu. Hélio died in 2009 aged 95, and according to his family he was very tidy on the mats right up until the end. And our very own

Mark Ormrod was told he would spend the rest of his life in a wheelchair, but being a triple amputee doesn’t stop him training like a beast. So if you think you have got a reason not to do Brazilian jiu-jitsu, you are almost certainly wrong.