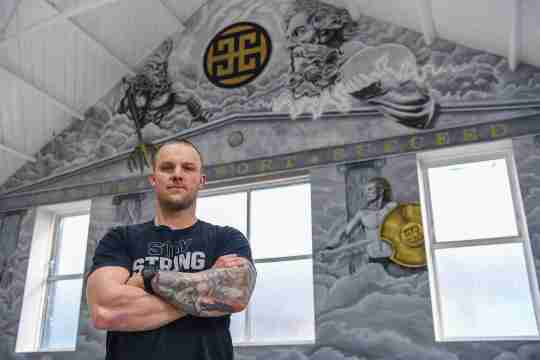 Leaving the military is a tough transition for a lot of people. I was in the Royal Marines for 12 years and when I left it was a shock. As a physical training instructor, when I walked through the camp everyone knew my name and there was always that level of respect.

When you leave it is like everything you’ve built up has been taken away. Nobody knows who you are and you have to establish your reputation from scratch. I found that hard, and I know being away from the comradery of the corps hits a lot of the lads hard.

But missing the corps is only part of the problem. Most former military suffer because of what we have witnessed. Nobody sees the things we see on the battlefield and comes back completely normal. It’s impossible not to be affected in some way, even if nothing is diagnosed.

I carried a lot of demons from my operational tour. I started drinking too much and I had trouble sleeping, as well as troubles with my temper. I managed to get things under control, but I know others had it far worse than me. I’ve lost more friends to suicide since leaving the military than I lost in Afghanistan.

Exercise has always been a salvation for me, ever since I was a kid. When I left the Marines I decided to make it a job and become a personal trainer. I very quickly fell in love with it. It has been amazing to watch what a few regular sessions can do. It is an incredibly rewarding job.

At first it was a struggle financially, taking a big pay cut from my military salary as I got established. I could have earned a lot more in private security, but after being away so long with the Marines, I wanted to be closer to home, and also I knew my path was heading in a different direction.

After a lot of hard work I am now the proud owner of my own gym, Pantheon Health and Fitness in Plymouth. Lockdown was a blow, like for everyone, but seeing people come back through the doors has been beautiful. We can’t wait to get up to full speed as soon as possible.

What Sam is doing with REORG is exactly what former military guys need. They need that feeling of brotherhood. But more than anything they need to keep training. That’s where my passion lies.

It doesn’t matter whether it’s CrossFit or jiu-jitsu. When your heart is burning and you want to quit, it’s hard to think about your problems. And it is not just the immediate effect. Over time the difference to your mental and physical health is immense. The fitter you get, the better you feel – it really is as simple as that. All you have to do is show up.