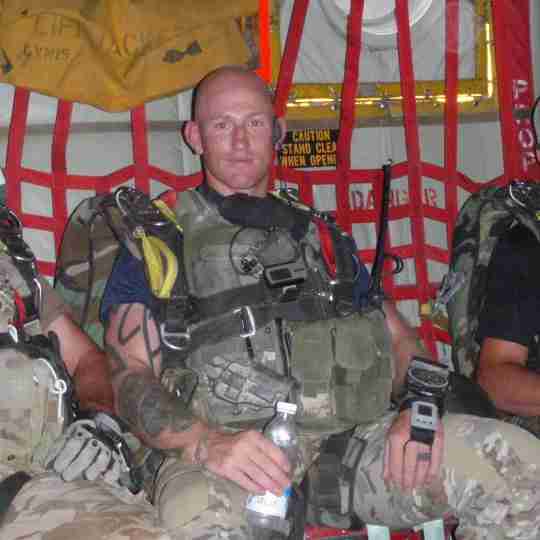 Parents are supposed to encourage their kids and my Dad certainly did that, but maybe not in the way he intended. I was born into a military family, but when I started getting myself into a bit of trouble as a kid, Dad clearly didn’t think I was heading in the right direction. When I said that I was thinking of joining up, he said: “The Army? You’ll never last five minutes.”

Being told I couldn’t do something was the best motivation for me and I have taken it with me throughout my career. I did last a bit more than five minutes. After 10 years in the Royal Engineers I spent six years in the elite Special Boat Service. I would have been a lifer, but then I injured my leg badly in a parachuting accident and my career was cut short.

I began building a career in private security and although I was successful, I found myself going through an identity crisis. I was used to being part of a close-knit team in the SBS, and now I was asking myself where I fitted into the world.

That is why REORG is so important, because it is very common for people to leave the military and feel lost. It doesn’t really matter whether you are doing jiu-jitsu or something else, as long as you keep moving and stay motivated.

Life brings mental health challenges, particularly for people who have served in the military, and I am a great believer in using physical activity to promote mental as well as physical health. This has been my approach, and I haven’t done it by halves.

I like to take a sport I’ve never done before and set myself the toughest challenge possible. So I started cycling and immediately looked for a record to break, then in 2018 I became the first person to cycle the 14,000-mile Pan-American highway in under 100 days, raising £900,000 for the Heads Together mental health campaign.

My next challenge is to be the first person ever to kayak the length of the Nile, from the source of the river in Rwanda all the way more than 4000 miles north to where it empties into the Mediterranean in Cairo. I was supposed to try in 2020 until Covid got in the way, but I am hoping to make the attempt later this year.

My Dad is brilliant, and I still don’t know whether he was just making an off-hand comment, or whether he was making a deliberate tactic to motivate me. Either way, it worked, and I have not looked back. Amazing what a good kick up the arse can do.

Dean Stott is the author of